Photos of the newly installed signs on 2/19/2021; cement base covered in plastic to allow time to cure.

If you’re driving along County Road 20 southwest of Middlebury, or are adventurous enough to be pedaling by, you may notice a new sign has appeared along the Trail. This Donor Recognition sign has been in the works for several years, and this February during the snowiest of spells, our friends over at Premier Signs worked their magic.

A permanent stone base will be built once construction begins on the final segment of Trail. Etched into stonework in the base will be the names of those contributing $10,000 and more to Trail completion.  This is expected to happen in Spring of 2022. But for now, those donors can be found on the sign near the base.

A heartfelt thank you goes out to all who’ve invested in this gift to our community.

In the autumn of 2019 Friends of the Pumpkinvine Nature Trail purchased two parcels of land needed for the trail extension. They closed on this parcel early in 2020 and transferred ownership to the Town of Shipshewana.

In late summer of 2020 Shipshewana received the final donation of land need to extend the Pumpkinvine Nature Trail from County Road 850 W into town. Construction of one mile of trail is expected to start in the spring of 2021. A parking lot and Trailhead will be located off of Depot St.

Many sections of the Pumpkinvine Nature Trail are over 10 years old. Erosion threatens to undermine the asphalt at some locations where the trail was built on a raised railroad bed. On May 1st Elkhart County Parks used a front loader tractor to move 100 tons of #53 gravel to an eroded area near County Road 26 just east of County Road 31. Four Friends volunteers spread the gravel after it was delivered by the tractor. Other sites need similar repair and Friends expect the work to continue into 2021. 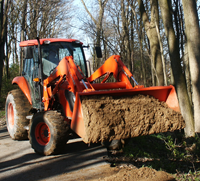 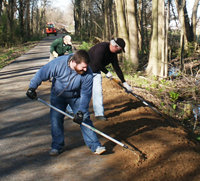