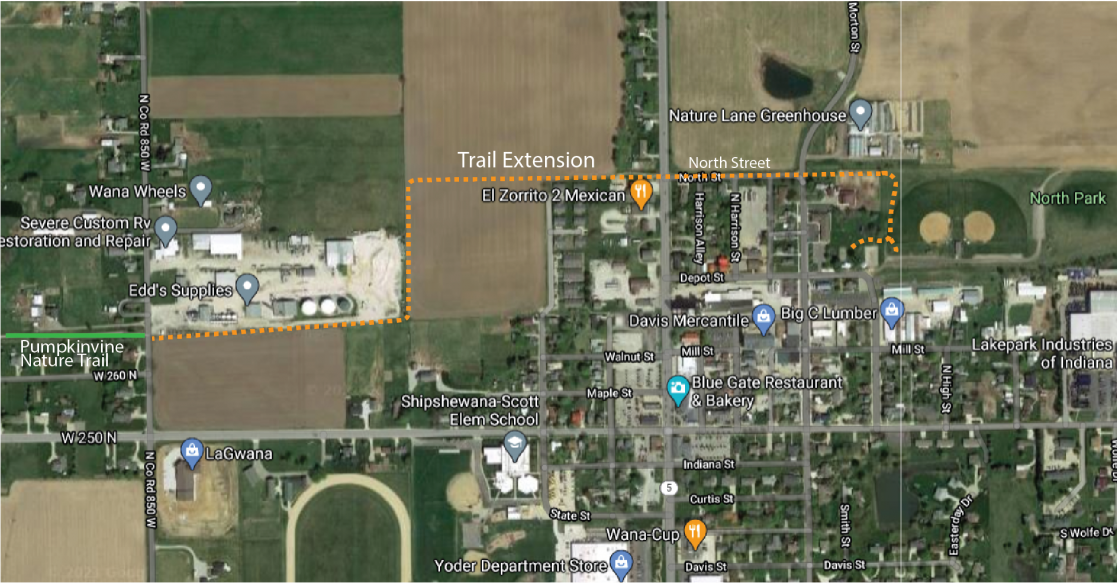 One of the final gaps in the Pumpkinvine Nature Trail has received funding for development. On Thursday, March 4th, the Indiana Department of Natural Resources’ NextLevel Trails program announced second round grant picks. This announcement comes nearly a near after the original decisions were due to be made; postponed due to the COVID-19 pandemic.

The town of Shipshewana became one of those recipients, securing $953,482 to extend the Pumpkinvine Nature Trail from County Road 850W into downtown Shipshewana and east to a trailhead on the northeast side of town.  According to Bob Shanahan, Shipshewana town manager, construction is set to begin this spring and be completed by fall 2021. And enthusiasm is high–with cyclists, commuters, and families are eager to enjoy all that the town has to offer, without the on-road risks.

“Receiving this grant was a team effort,” said Brittany Short, Friends of the Pumpkinvine president. “It began with the previous town manager, Mike Sutter in 2016 and continued with the current town manager, Bob Shanahan and a lot of help from Norm Kauffmann and others.”

Just five years ago, prospects were grim that such a connection could be achieved. The Friends of the Pumpkinvine, who have been the grass-roots organizers and advocates for Pumpkinvine related construction projects for the better part of 30 years, had cards stacked against them. Major sections of the current trail right-of-way, were in private ownership by parties unfavorable to it’s construction.

But even so, former Friend’s Board President John Yoder wasn’t deterred. In the summer of 2016 he and former Friends board member Norm Kauffmann, who was also previously a Shipshewana Town Manager, decided to visit then Manager, Mike Sutter, to discuss the possibility of extending the Pumpkinvine to State Road 4 and even to the park east of town.

At that meeting, Sutter was convinced by the men’s enthusiasm and gave approval for Kauffmann to develop a land acquisition strategy on behalf of the Town. Even though the Pumpkinvine was very popular with Shipshewana-area residents, Kauffmann’s job was daunting, as he had to convince no less than five property owners to sell or donate land for trail construction.

Over the next year, Kauffmann worked to develop an ad hoc committee of supporters. Willie Christner, one of those supporters and a local businessman from the Amish community, ended up providing the first of several major breakthroughs in the path to completion. Christner offered to purchase one of the largest parcels from a landowner who was unfavorable to trail development, and then donate a strip of that property to the Town for trail construction, provided that the Town would rezone the parcel from industrial to agricultural. Kauffmann achieved that goal with the help of Bob Shanahan who, at the time, was the LaGrange County zoning administrator. Shanahan successfully gained approval from the county Zoning Board in 2017.

Meanwhile, Kauffmann was in contact with the others who owned land along the proposed route. He discovered that two major landowners, Alvin and Elsie Miller and Levi and Joanna King, were also willing to donate a strip of their land for the trail. To recognize their generosity, Kauffmann invited the Millers, Kings and Christeners to the Friends of the Pumpkinvine 2017 Annual Meeting at the Spohn Ballroom in Goshen where they received a warm round of applause by the group of 250 attendees.

In August 2017, Mike Sutter retired, and Bob Shanahan took over as Shipshewana town manager, and Kauffmann began working with him to move the project forward. But in 2018, negotiations with the two final landowners stalled. It became evident that without a bigger show of support from the town government on behalf of the community, talks could take many more years. With this in mind, Kauffmann engaged the help of newly elected Councilman Zac Stoltzfus, who had campaigned on the importance of bringing the Pumpkinvine into downtown. Stoltzfus championed the Pumpkinvine extension on the Town Council and garnered the council member’s support for the Trail’s land acquisition. In March of 2019 the Friends of the Pumpkinvine, in collaboration with the Town of Shipshewana, voted to purchase the two final parcels of land.

Meanwhile, Kauffmann formalized agreements with Alvin and Elsie Miller, Levi and Joanna King and Willie and Ester Christner to donate a 40-foot right of way for trail development. After more meetings and negotiating on the price for purchase, in October of 2019 the two remaining landowners signed a purchase agreement to sell the final parcels. The Friends of the Pumpkinvine closed on the land in early 2020.

During 2019, while negotiations were underway, Friends board member John Ferguson was writing a grant for the governor’s NextLevel Trail program — funded through the Indiana Department of Natural Resources (DNR). Ferguson submitted a draft of the proposal to Bob Shanahan who had engineering firm DLZ Corp. rework it for submission. The town submitted the updated grant, and the DNR announced funding awards in March of this year. Important data for the grant submission was provided by a trail counter placed along the trail just west of County Road 850W in June of 2020. Friends board member, Bob Carrico, helped secure funding for it’s installation, knowing it would be critical to ongoing fundraising efforts. Carrico and fellow Friends’ board members Bud Wulliman and Cory Wilson installed the counter that showed between Jun 14, 2020 and Jan. 1, 2021, 60,584 cyclists and 10,229 walkers used the trail in that location.

“Closing this gap in the trail was the work of many dedicated community members,” said Brittany Short, Friends president, “just like other parts of the Pumpkinvine were. It’s yet another example of how creative public-private partnerships can lead to wonderful outcomes. Thanks to Norm Kauffmann’s patient advocacy of the trail within the town of Shipshewana for all of those years, and to the others who generously donated time, energy and resources. We will have a safe route into Shipshewana by the end of the year; what a gift they’ve given to this community.”

And for trail enthusiasts across the region, this is good news indeed.