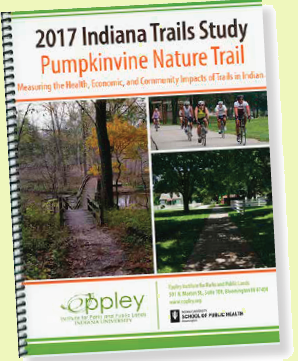 Last summer the Eppley Institute for Parks and Public Lands at Indiana University’s School of Public Health conducted a survey on the Pumpkinvine Nature Trail to collect data on trail usage, health factors relating to trail usage and the economic impact the trail has on surrounding communities. The Pumpkinvine was one of eight trail systems in Indiana that participated in this study.

Across all eight trails, there were some key findings.

While the majority of Pumpkinvine users are on the trail for physical activity, 21% of users say they use the trail for recreation. This was the highest average of any trail that was surveyed. Perhaps this is why people travel further to use the trail.

You may have seen the recent articles in The Goshen News on how the Pumpkinvine Nature Trail helps boost the local economy. According to this study, it’s true. On average, Pumpkinvine users report spending more than $3000 per year on trail-related expenditures, such as bikes, clothing, food – and transportation to get to the trail (gas, etc). This coincides with the long distances people travel to use the trail.  The information above is a broad summary of the Eppley report. To view the full trail study summary report for the Pumpkinvine Nature Trail, visit https://eppley.org/wp-content/uploads/2018/06/TrailsStudy_PumpkinvineNTReport.pdf.