↓
Trail will connect to the Pumpkinvine north of U.S. 20
By Dick Cook 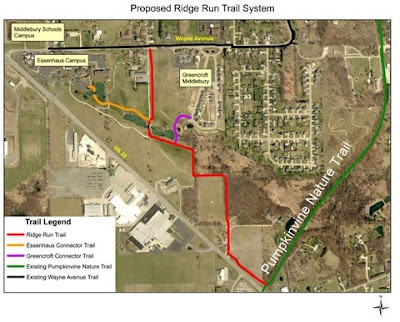 After years of planning and fundraising, the Friends of the Middlebury Parks have signed a contract with Niblock Excavating and Asphalt to build the Ridge Run Trail system. The trail will connect That Pretty Place Bed and Breakfast, the Greencroft Middlebury Retirement Community, the Essenhaus campus and the Middlebury Schools campus with the Pumpkinvine Nature Trail.
Construction was to have started last fall, but due to Niblock’s heavy construction schedule for other projects, construction is now scheduled to begin in spring 2017, according to Jacob Hoeger, Niblock spokesperson. The new trail will have an asphalt surface, be 10-feet wide and connect to the Pumpkinvine just north of the tunnel under U.S. 20. The spurs to Greencroft Middlebury and the Essenhaus will be 10-feet wide, and the Greencroft spur will be packed stone.
The Ridge Run Trail project was made possible from the support of the members of the Friends of the Middlebury Parks organization, grants from the State of Indiana’s Place Based Investment Fund and the Community Foundation of Elkhart County, donations from the Corson Family Foundation, the Das Dutchman Essenhaus and Greencroft Middlebury; as well as contributions from over 100 individuals, families, civic clubs, family foundations and businesses.

This year marks the Rails-To-Trails Conservancy’s fifth annual Opening Day for Trails! On Saturday, April 8, 2017, people across the nation will kick off the spring trail season by hitting their favorite trails for a walk, run, ride or special event. Here are a few of the possibility on the Pumpkinvine Nature Trail, but you might also create an event with family and friends. The point is to get out on a trail and kick off the trail riding-and-walking season. All events are free.
11 a.m. – 2 p.m.     Bike Checks
Chain Reaction Bicycle Project will be at Abshire Park in Goshen to help make sure your bike is ready for the season. CRBP is a non-profit bicycle shop promoting bicycling in the Goshen community and increasing access to bicycles and repairs for people with low income and on work release.
11 a.m. – 12:30 p.m.     3.5-mile Group Fitness Walk (round-trip)
Get your heart rate up and meet other walkers on this brisk walk between Abshire Park and County Road 28. The group will be led by Vivian Schmucker, local marathon walker. Meet at Abshire Park in Goshen.

Share how you plan to celebrate and explore trails on Opening Day with us on social media using #RTCOpeningDay!

For more information about Opening Day for Trails, visit

http://www.railstotrails.org/opening-day-for-trails/
When I look back at the history of the Pumpkinvine Nature Trail, one feature that permeates that history is the positive partnership between the Friends of the Pumpkinvine and the four local public agencies (LPAs) that built and manage the trail now – Goshen Park and Recreation, Elkhart County Parks, Middlebury Parks and the Town of Shipshewana. They have been indispensable to the Pumpkinvine’s creation and success because they had the skills the Friends of the Pumpkinvine volunteers lacked.
The volunteers, who have made up the Friends of the Pumpkinvine board of directors since the early ‘90s had skills in writing, photography, public relations and fundraising, but none of us had a clue about how to build or run a park. In other words, we needed expertise beyond our set of skills.
Because of our skill deficit, we knew that we would need the help of the local public agencies where the abandoned Pumpkinvine corridor was located to make it into a linear park. At the beginning, we were primarily in contact with Goshen’s park director, Art Bleau and Elkhart County Parks director, Dan Seltenright, and we were thrilled to discover that both were open to the idea of turning the Pumpkinvine corridor into a linear park because that idea was already in their master plans.
But lines on maps and words on paper are hollow without follow through. The rails-to-trails idea for the Pumpkinvine corridor moved forward because Bleu and Seltenright saw its potential for success by working with the Friends of the Pumpkinvine. That was the beginning of a partnership between the Friends of the Pumpkinvine and the LPA leadership that has lasted over 25 years. When Rich Faye and Sheri Howland succeeded Bleau and Larry Neff and Diane Madison succeeded Seltenright, the collaboration continued. Roger Krider, Middlebury town manager, joined as a partner, as did his successors Marcel Coulomb, Lowell Miller and Mark Salee. In Shipshewana, former Friends of the Pumpkinvine board member, Norm Kauffmann, orchestrated their buy in to the rails-to-trails concept, as did his successors Dave Swartley, Bill Boyer, Mike Puro, Sheryl Kelly and Mike Sutter.
All these changes in leadership for the managing agencies were staggered, assuring continuity in the management of the Pumpkinvine Nature Trail. Yet in the past eight months, we had seen the departure of Madison, Salee and Howland, and, I learned as I was writing this column in mid-February, that Mike Sutter has announced that he is retiring in June 2017. So, within the space of one year we will have new leadership in all four LPAs that manage the Pumpkinvine Nature Trail.
Will so much change in the leadership of these LPAs be positive or negative for the Pumpkinvine? If the past in any indicator of the future, I’m optimistic the new leaders (see page 4) will continue the tradition of being excellent stewards of the Pumpkinvine. And I’m grateful for the care and vision the departing leaders – Madison, Salee, Howland and Sutter — have shown the trail. They have been outstanding trail managers, advocates and partners. — John Yoder