[From Goshen News, March 12, 2016]
Early this week we were working on the portion of Pumpkinvine Trail that overlooks Butts Lake. The lake is really more of a large marshy pond, with fens of reedy grass throughout. I don’t know whether it actually has its own water source, or whether it is fed by run-off, particularly in the spring — in other words, a vernal marsh.
Regardless, it is large enough and holds plenty of water so that it is very attractive to birds — especially so at this time of year to ducks, Canada geese, sandhill cranes and redwing blackbirds.
In the lulls between work — filling the saw up with gas, shedding a coat or a sweatshirt, shifting equipment to the next site — I was often stopped by the sound of geese or blackbirds or cranes. I stood and listened and looked.
I’m not a birder, so I don’t know how to properly describe what I was seeing and hearing, but I do know that I love the keening trill of the redwing blackbird. There is hardly any sound that says more clearly “warm weather” to me.
I’m not so fond of goose honking, but the sound of them flying low overhead, the work of their breath, the wind in their wings is something that makes me pause. And the clacking croak of the cranes is one of my favorite sounds in all the natural world. It is a woody, prehistoric call which carries long distances, and almost invariably makes me stop whatever I’m doing when I hear it. Then I look around, scanning the sky, especially if the cry came from far, far above, until I see small black lines waving way overhead.
Whenever I put the saw down, those sounds came clear and loud all around, birds coming and going, letting each other know.
While I worked under the loud motor of the saw, cutting through sassafras and cherry and occasional hawthorn and maple, I thought about those birds, and the water and the trees that I was working among, and the lay of the land that shapes all of these things.
The Pumpkinvine railroad bed itself was built by humans, of course, altering the contour of the land. Raise it here with soil and stone, lower it there with shovel and machine. It slithers across the land’s natural rise and fall.
I found myself wondering what Butts Lake was like before the railroad. Was there more water, was it larger? What about before farming? There are lots of similar kettle lake remnants all around us, belying our more recent industrial-agriculture past of tiling and draining, and the much deeper history of slow glacial retreat thousands of years ago.
I couldn’t help noticing the community of trees that line the Pumpkinvine, and which spill, from time to time, into larger open woodlots. As I mentioned, there is lots of sassafras and cherry, the former an especially good pioneer species, which can be nearly invasive. Some of the cherry are pretty large. But the really big trees out here are oaks. Mostly northern red oak and white, I think. I didn’t go tromping onto private property (and I don’t advise anyone else to, either) for a closer look, but judging by the shape and structure, the bark patterns and the sheer size of these trees, I’m pretty sure that’s what they are. There very well may be an occasional bur oak, swamp white oak, pin oak and even possibly a chinkapin oak. Some of them, most notably the whites, have been here for at least 100 years, a few pushing 25 to 50 years beyond that. Beneath them, the leaf litter is thick and the forest floor growth is thin, inhibited by the heavy summer shade.
Though these linear woodlands contain no trees that could be considered pre-settlement, and though they occupy disturbed, fringe ground — attested by the occasional piles of field stone which they’ve grown up around — nevertheless their ancestry is extremely old and specific to this place.
The same is true of the cranes and the other birds that are arriving and passing through at this moment.
The same is true, including in a poetic sense, of the Butts Lake basin, which has held water and sustained plants and animals for who knows how long.
Though I was working hard, and making an awful racket with the saw, I came away from my task feeling relaxed. Muscles aching and back stiff, but satisfied and clear-minded. I looked around at the early-spring world: the land and its creatures, doing what they need to, what they ought to, what they know to. It is deeply comforting to be part of this rhythm.
Aaron Sawatsky-Kingsley is Goshen’s urban forester. He can be reached at aaronkingsley@maplenet. net or at 537-0986.

I just ran across this Pumpkinvine-related photo in a video on the Middlebury town website.  The video shows what a vital part of the Middlebury economy the Krider Nursery was and how important the Pumpkinvine railroad was for shipping nursery stock for the business.  Rex Krider: Introduction to Krider Nurseries and Krider Garden 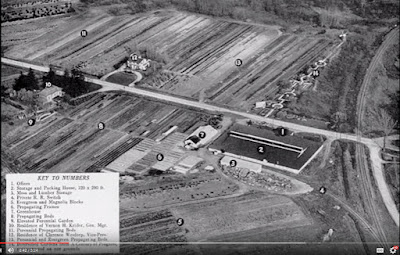 The legend on the bottom left of the photo identifies various part of the nursery. The road going across the photo is County Road 8. The Pumpkinvine railroad curves across the right side and you can see Krider World’s Fair Garden to its left.