The workers are making great progress on Middlebury to Shipshewana.  These photos are from July 23, 2011.  Construction progress, July 23, 2011.  What remains to be done is finish the paving of the connection between the trail and the county roads that it crosses, and to pour concrete for the easements across the trail, mainly between CR 1150 W and CR 1100 W.  The other missing element is the shoulder. They are using a fine crushed stone for a shoulder instead of planting grass. Grass needs to be mowed and even when it is not mowed, it catches debris, like leaves and twigs, from the trail when workers are trying to sweep the trail clean. I think it looks great.

The other major gap is between the end of the trail east of the DQ and SR 13. At the moment, there is a path through the woods from the DQ parking lot to access the trail. Since workers are working every day at various points, it is not adviseable to ride the trail then. However, on weekends it is possible.

The trail construction is on schedule for completion by Sept. 1, 2011. 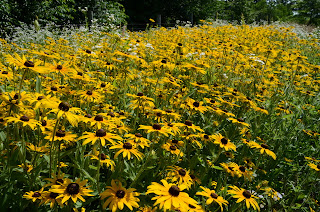 Over it 100 year history, the Pumpkinvine corridor became tree lined — not something that happens to every rail corridor by any means. A main line like the Norfolk Southern that goes through Elkhart County has almost no trees along it tracks. So it was one of the primary benefits of preserving this greenway that it was tree lined, which means it would offer shade to the walker or rider.

But the corridor of 1981 when the trains stopped running, which was heavily tree, lined has changed. Several farmers who thought they owned the corridor leveled the trees. In negotiating with them later to avoid long and expensive litigation, the Friends of the Pumpkinvine agreed to swap the original corridor for a path around their fields. The result is that the current five miles is a mixture of a tree-lined greenway and open areas that go through land planted in corn and soybeans.

I was thinking about this change as I rode the trail this week. The transition from the open areas to the cool shade of the trees was dramatic. It felt like the temperature dropped 10 degrees when I entered the shaded sections from the open areas. On a hot day, the shade was a great relief.

Yet the open areas had interesting things to see as well. Each time I ride through the fields I see the change in the height of the corn. It makes me think more about the source of my food and wonder about the well being of the farmers in general. Those open spaces are also an opportunity for us to plant native grasses and wildflowers, which Elkhart County Parks has done in several places. Right now they are spectacular.

So, although the Pumpkinve isn’t a continuous tree-lined greenway, it has variety that is visually stimulating and open spaces that make me appreciate the shaded areas even more. — John Yoder