Friends of the Pumpkinvine annual dinner
Greencroft Senior Center
April 26, 2011
John Yoder, president
It’s a pleasure to see so many supporters and potential supporters of the Friends of the Pumpkinvine and the Pumpkinvine Nature Trail. Thank you for coming.
Tonight my assignment is to briefly review the state of the trail and the Friends organization. My title (inspired by the tunnel under US 20) is: “I see a light at the end of the tunnel.”
When we use that phrase, “light at the end of the tunnel,” we usually mean that we’re moving to a more satisfying phase of a project, like saying, “We finished putting the shingles on the roof, the carpet is laid; the electrical wiring is finished:  I see light at the end of the tunnel – the day we can all move into our new house.”
Tonight I see lights like that in three area:
·         Trail construction
·         Legal issues
·         The future of the Friends of the Pumpkinvine as an organization
First: Trail construction
To say that this trail has been slow to materialize is an understatement. Goshen opened 1.75 miles in 2000, Middlebury added .6 miles in 2005. The pace picked up in 2008: and Elkhart County Parks built .5 miles in 2008 and 2.9 miles in 2009, and a small section and tunnel in 2010 for a total of five plus miles in 16 years. That pace tries the patience of the most loyal trail advocates. How grateful we are that you have continued to be supporters all those years.
But the light I see reflects the fact that 2011 will be a huge year for construction. And 2012 will see another mile finished.
Here are a few images from 2010 to remind you of what your support has helped accomplish.  The tunnel under U.S. 20 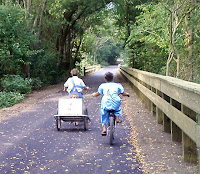 As we imagine the future, we hope that you will join us in this new phase of the trail and the Friends’ organization where together we help maintain a wonderful, beautiful, health-inducing greenway that will enhance our community for generations to come. Thank you for your attention.